Maryana Dzhokhadze is an artist based in Berlin and New York City. 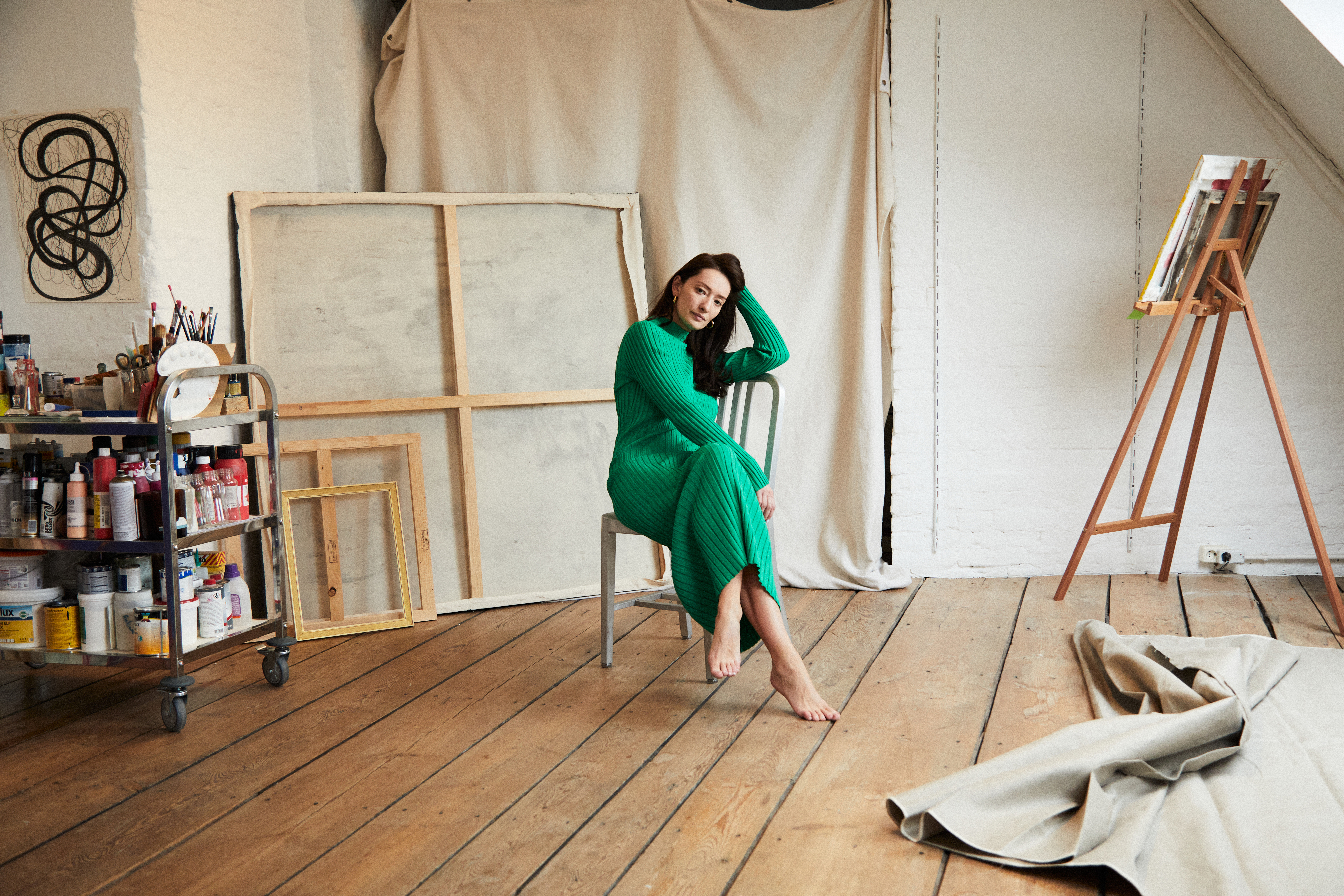 Maryana Dzhokhadze is an artist based in Berlin and New York City.

“Female view on war & crisis” showcasing “You become the voice you feed” work.

Solo Exhibition: What Is Love, at Parsons School of Design, New York City

Maryana studies Fine Arts (M.Ed) in combination with Pedagogics at the University of The Arts in Berlin. She was a student of the class of Ai Wei Wei and Prof. Dr. Hito Steyerl and switched now to the Class of Prof. David Schutter who recently moved from Chicago to Berlin. Maryana switched during her Grundlehre from performance to painting. In addition she studied German Philology and Pedagogics at Freie University in Berlin.

Maryana was born in Odessa, of a Georgian father and an Ukrainian Jewish mother, where she used to live until the age of 6. In 2011 she moved from Essen to Berlin where she worked in different fields including Real Estate/Investment while studying Business Administration at HWR before starting her BA in Fine Arts.

Her current art work includes writing, analogue black and white photography, performance, painting on canvas and wood with element such as cement and glass. As a visual person, her photographic images are particularly interesting to her as they relate to the person, emotion or situation she is photographing. She views the world as a more than just a series of passing images and sees to not just capture a moment but to tell the story of her own version of reality.

She began to photograph and explore the environment since she was a child, starting to research find inspiration in every little thing. The most fascinating, deep pictures for her are those tokens with an analogue camera captured great emotional moments or people. She is into stories of people, she likes listening and writing stories in different ways. Furthermore, she likes to develop herself by trying out new ways of expressing herself or a political situation as well as a private situation experienced by someone in her cultural environment.

One of her performances include an action of breaking glass. She smashes the glass and fix it back together. Sounds simple. But the idea behind this is, that if you smash the glass and try to fix it, you can’t go back and restore the original condition. Everything what happens next is a transformation into something new, something different. It simply changes. A new way of an aesthetically understanding of images and life is starting.

After this performance, Maryana calls “Destroy & Love” which took her mostly 1 hour she figured out that things which broke, relationships, friendships, political missteps even a vase gives you the opportunity to transform it into something different, which shows you maybe a more beautiful and everlasting way of a perspective you wouldn’t have if it wouldn’t break.

In her paintings, she tried to capture this idea that pain and suffrage can inspire learning and growth in her broken glass works. She has transformed shattered glass using cement and wood into a new creation.

In her current, and she calls it Life project, she is working with this content.

Today, more than ever, the message of individualistic expression is highly relevant. Studying fine arts is an extremely intense experience to her because in today’s changing economy and understanding of art and the different ways of approach and define art shows how different and at the same time beautiful as liberating art can be. It is all about the changes happen all around us and the ability to change something. Art is accessible to everyone who shows interest in it.

It doesn’t matter what kind of art it might be, whether it is performance art or an oil painting or maybe a photograph: everyone can and should get the access to it. Based on this multiple education combined with Literature and Linguistics (German philology) and work is very important to her as you can see in her portfolio. In her first class of Prof. Dr. Hito Steyerl she has learned so much about changes and new art media that this helped Maryana, to question our technical progress and daily routine of social media effects, transforming/translating and projecting this into her work.

My work explores the relationship between broken things and human beings. Moreover, it focuses on broken relationships in general, fragmented ideologies, and political missteps. It is a conversation between what happened, what is meant to be left behind, and how important it is to move forward – to reinterpret in order to transform.

As human beings, we find it devastating to see things breaking or falling apart. For me, I know it is the beginning of something new – something completely different. Once my mind agrees with this idea I feel the emotion of happiness and that’s where my work begins. Having the Power to change something, to transform my reality and, in this way, my own future: priceless.

Furthermore, I want to express my thoughts and feelings rather than copy paste the reality, or the picture of reality, into my work by painting something that already exists! My goal is to remake the way I see the world, including the emotions I experience while walking on this earth. My way of thinking and working changed completely when one of the most important human beings in my life, my grandfather, who assumed the role as my father, passed away in 2019.

I was and still am devastated – sometimes more, sometimes less. Ever since, I keep asking myself: is this really the turning point in my life? The turning point of my art careers? Am I yet another artist who is going to let this experience influence her work, and how am I going to think about death now? The answer: yes.

Our interactions amongst others throughout our daily lives is what molds us into the beings we see before us today. And this work, is one facet, one representation, of my life. Rebirth and new beginnings are still connected to my broken glass work but somehow it is deeper now and with more meaning as I work with the meaning of death in a way I never thought I might.

Growing up between three different cultures: Judaism, Ukrainian and Georgian traditions I learned very quick to adapt myself no matter where I was. Especially after we immigrated to Germany.

Ever since I was a child I have been fascinated by the spiritual world, by old women who were talking about the future and read out of coffee cups and cards. I was sensitive to all those things – the two worlds in fused together in to one world. This idea was so adventurous that I started at a very early age writing and photographing people.

No one in my family was ever familiar with art. As the only family member, I often felt misunderstood and not heard that resulted in feelings of loneliness. The only person who I was able to have critical conversations about art and literature was my grandfather who have had a huge library back then in Odessa.

I did not know anyone who had read that much of Russian and English literature like him. That was our thing: he told me all about what he read, about Dostoevsky and Ernest Hemingway and I had pictures in my head of all those life stories. That’s where I see that art is not only a beautiful picture with flowers or a landscape, it is so much more, more intellectual to me than it could decoratively be.

People think, art is just something to look at and say: oh, that’s beautiful. But for me art is much more. For me art is the truth. It doesn’t necessarily have to be beautiful – it can’t always be beautiful solely based on the looks. It accumulates it’s beauty by the uniquely inherent storytelling to itself.